Dramaturgical Notes on “The Last Ship” 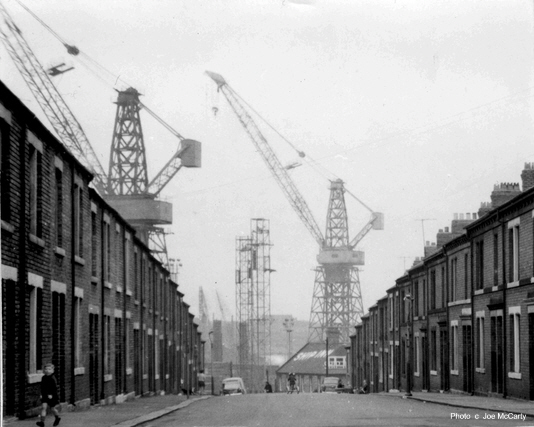 Gerald Street. Birthplace of ‘Sting’ – October 2, 1951.  The photo was taken by Joe McCarty in the mid 1960’s. The street was demolished towards the end of that same decade.

The Last Ship is set in Sting’s hometown of Wallsend in the north east of England, a town once celebrated for its exceptional shipbuilding and coal industries. Historically, the town was known as Wallsend on Tyne; “Wallsend” representing the terminus point of Hadrian’s Wall, the barrier wall built on the orders of Roman Emperor Hadrian in AD127. The Roman Empire’s traces are still to be found in the excavated ruins of Segedunum, the garrison town built to oversee and defend this outlying measure of the wall. “On Tyne” denotes Wallsend’s place on the shores of the River Tyne, which wends it way eastward to the the North Sea. At the pinnacle of shipbuilding in the UK, more than a dozen shipyards lined the Tyneside. The Swan Hunter Shipyard reigned in this modern industrial empire. The Last Ship takes its inspiration in part from Swan Hunter’s legacy and shifting fates.

The Swans’ yard had its origins in the late 1800s. Its fame rose with the launch of The RMS Mauretania in 1906; the ocean liner crossed the Atlantic with unrivaled elegance and speed, shattering the previous crossing records and holding the Blue Riband honor for fastest crossing for over twenty years. Generations of Wallsend shipbuilders crafted myriad vessels, from quality passenger liners to refrigerated cargo ships to super tankers. Photographs of Wallsend document the ascent of colossal ships at the end of streets of terraced houses, year after year. The ships dominated the horizon as the yard was almost synonymous with the community itself, employing over 3,000 workers at its peak and building over 2,700 vessels in the life of the shipyard.

But through the years, the shipbuilding industry faced repeated challenges and the empire faltered. In the late 1970s, Swans’ came under national ownership and was designated a warship building division, constructing aircraft carriers, battleships, cruisers, destroyers, and frigates.

In the 1980s, Swans’ was privatized once again, and although the shipbuilder continued to build high quality vessels, foreign competition, insufficient orders, and a failure to secure government support thwarted the efforts to sustain the company. The Independent reported that there were 1,600 workers made redundant in 1993, with only 633 workers remaining in the yards. Ultimately, Swan Hunter went into receivership, a blow to a community for whom the shipyard was both the pride and lifeblood.

The Last Ship takes up this suspended state as the point of departure for its tale.