Consider Yourself… A Victim of Fate?

Home Blog Consider Yourself… A Victim of Fate?

Growing up and pondering the many questions of life always made me wonder about fate and destiny. I’d say that I believe in fate, but not destiny. The difference being, for me at least, that fate was out of my hands. It’s hard for me to explain it but whenever I thought about the future, I always felt that fate had a course planned out for me. Which leads me to my question for the cast of Oliver! …

For those who have seen the play and know the story, Oliver, in a way, finds a new life by being pushed into a life that, I’d say, was fated to him. So, I asked a few of the cast to tell me a story of their fate. What did they do that they might have never done due to a fated circumstance? Here are a few stories from the very large cast of Oliver! (sorry, there were almost 40 of them so I couldn’t get them all!)… 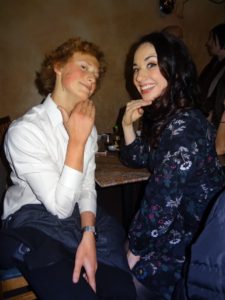 Christian Labertew (left, The Artful Dodger)– “I never thought I would act. I did it because my dad forced me to audition for a show, and I stayed in the show because I had a crush on one of the girls casted in the show… I played Linus and to this day, I still have the blue blanket.”

Stephanie Maloney (right, ensemble) – “One thing I never thought I’d be able to do since I’ve been performing professional – I’ve been traveling internationally. I’ve been able to take so much pride in ordering food in a different language or figuring out the subway system in Dubai or Korea, cities I never thought that I would be able to travel to… Now I have major wanderlust and want to travel more.” A couple of her favorite places? Portland, Oregon and Seoul, Korea. 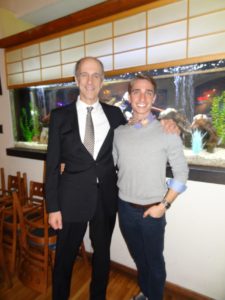 John Peterson (left, ensemble) – “I caught the theatre bug, as people would say. It definitely changed the course of my life. I thought I would be an engineer… “His very first play? “I was an oompa loompa in Willy Wonka and the Chocolate Factory in the seventh grade.”

James Michael Reilly (right, Mr. Sowerberry/Dr. Grimwig) – “My senior year in high school… I sat with a bunch of people at lunch who were drama people. They knew someone I knew from something else. And they encouraged me to try out for the play. That was something where, I had just done the ski club, cross country, but just because of these people I was just hanging out with in the lunch room that made me try out for the play.” Many decades later… he is still an actor due to the company he kept during high school. 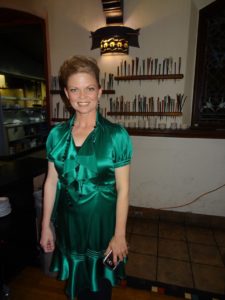 Tamari Dunbar (ensemble) – “My mother always wanted to be an actor, but it didn’t ever happen. She pushed me pretty much since I was about ten and through college… that’s how I met my husband – through the theatre. I don’t think I would’ve ever met him if I hadn’t done theatre!” Outside of her theatre career? Well, she worked at a bank once. 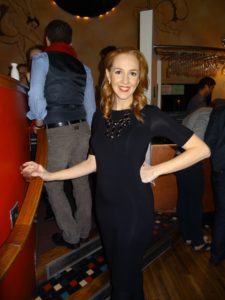 Michelle Blake (ensemble) – “Not pushed into… but it was a difficult decision to have a child. It absolutely changed my life for the better and I’m very, very happy I did it.” That bundle of joy that changed her life? She’s 13 and might take after her husband in the computer science industry… Michelle isn’t disappointed at all that she’s not as interested in a theatre career. 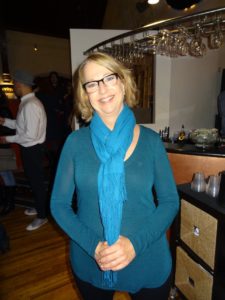 Linda Griffin (Mrs. Corney/ensemble) – “I feel like I’ve lived my life sort of saying yes… And as a result of saying yes, I’ve done so many wonderful things in my life. I don’t know!” Okay, well, that just doesn’t seem fair. So, what about her favorite “yes”? Linda has been married 38 years and currently works with her husband on Oliver! He’s the conductor. 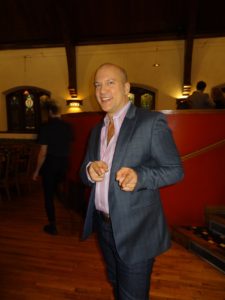 Lenny Daniel (ensemble/Dance Captain) – “Mrs. Birmingham… I was in sixth grade and she needed someone to dance in a little show that she was putting on at school. It gave me such joy, confidence.” Needless to point out, Lenny is still enjoying the career path in theatre that Mrs. Birmingham originally put him on. And what was that little diddy that he was asked to participate in? “It was a made-up show of Shel Silverstein poems.”

I suppose it’s only fair that I think of my own fated story to share with everyone so, here it is… Not too many years ago, a friend of mine got married in Bali. We are close, close friends. I had to go to Bali. But, there wasn’t anyone else I knew that would be going from Utah. Now, as independent as I am with life chores and work tasks, I am fairly dependent when it comes to socialization. I was the shy, quiet kid in the back of the classroom that wouldn’t talk unless spoken to and perhaps, I was also that same kid who hung out in the dark corner alone at parties until my friends came. And I hate traveling alone. Well, in this situation, I had no choice. I had to go. She’s too good of a friend! So, I did.

During that trip to Bali, I had the most incredible time. I’ll admit that I wasn’t alone the entire time, but those moments I was by myself? Okay, I didn’t mind it. And if I hadn’t been on my own, I wouldn’t have been able to experience the Ubud Monkey Forest, have pig roast from the famous Ibu Oka restaurant (with fresh coconut water, might I add!), see the Pura Desa temple, or a eat a meal at Naughty Nuri’s Warung and Grill with new friends. It was pretty killer…

Check out Oliver! at the Pioneer Theatre Company until December 17, 2016. It’s fate that you do.