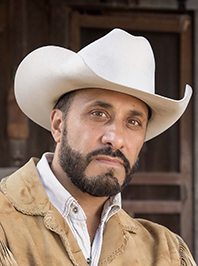 If you look at the cast list, you’ll see the name AJ Silver, who’s identified as the “Trick Roper/Whip Specialist.”  You know if Trick Roper is a cast member, you’re going to be watching some action on stage. AJ shares the stage with the cast in performing some of the more complicated rope tricks that are depicted in the scenes.

In real life, Will Rogers traveled around the world, performing rope tricks at rodeos or other western-themed events. When (invariably) the rope would slip, or he’d fumble the move, Rogers would ad-lib.

It was here that Rogers developed, according to AJ, his gift of the quip; the light-hearted commentary that gave him time to collect and reposition his rope but keep the audience entertained and even distracted from the error.

“I saw trick riders in rodeos in Madison Square Garden in NYC, and I decided that is what I wanted to do,” said AJ. “I learned the craft at Pelham Park and then at 11 years old, I picked up roping so I’d be more useful on the circuit.”

When asked if it was difficult to learn, AJ replied, “Roping is a delicate skill. It looks easy, but it’s JUST a rope. No wire, no gimmick, the rope isn’t stiff.” So, to patrons who think there is a trick to safely snapping rose petals off stems with a whip…there isn’t!

“There are only a handful of us around the world who do this, so I stay pretty busy and travel all the time.” AJ also notes, surprisingly, that this is the first time he’s worked with David on this show.

AJ took some time on set to show off his moves for us in the video above; you’ll see more on stage!