A Real Peak at Rehearsal

It’s the evening. I’m at home. My fingers are on the keyboard. Ready. Um, let’s see… So. So. So… So! Why don’t I tell you what a true rehearsal scene looks like? I’m happy to report that I was able to sit in on a bit of rehearsal today and can now set up a more accurate scene! So, as a Pioneer Theatre Company Blog exclusive, I give you – our amazing supporters – a sneak peak at a Perpetual Girl rehearsal.

Okay, so, now, more accurately, picture this. It’s a large university rehearsal room, a little stark because it’s at a university (that part still holds true). There’s a long mirror on the back wall where the actors can clearly see their reflection but only around the stage manager, the director and the writer. These three gals (yep, I said gals – girl power!) are seated behind a brown, wooden, eight-foot, rectangular table with scripts, pencils, pens, water and notes. It’s a working desk space. 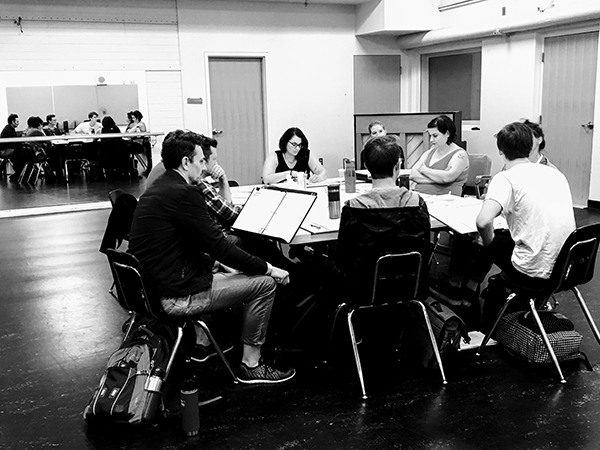 To the side of them, there’s another similar table placed perpendicular and closer to the side wall where I quietly observe at the far end, sitting in my blue, plastic chair. Gavin Yehle (Young Jack) sits adjacent to me, parallel to the wall and the table. A row of more blue, plastic chairs are lined up against the front wall where the rest of the cast sits when not on “stage.” That stage area is made up of five black, adjustable, sturdy music stands where each actor has their script opened to the page where they are currently running their lines.

As Anne Brings voices her lines behind one of those stands, everyone is watching, listening, studying and taking in her portrayal of Belle. “Oddly ageless,” she says. Wait! Was that in the script that I read? I don’t remember. Have changes already been made? I feel like they have, but I’m not sure. “Mostly just the beginning – the first scene and the final scene, I actually rewrote last night,” writer Wendy Weiner confirms to me after rehearsals when we sat down to talk.

Anne plays out a few more lines before director Julie Kramer interjects with feedback for her character. As I watch Julie and Anne talk, all I can think about is how Anne truly is that stereotypical Hollywood type. Now, mind you, I’m saying that she is lovely, pretty, young. She’s like all those girls we see on screen; she’s perfect for Hollywood. And I say write this with no regard to the content of the part she is playing (purely visual), but she is that fairytale archetype. I see it then. Clearly.

However, knowing the story and having read an earlier draft of the script, I know there’s a purpose. In a female-driven play written by a female writer, directed by a female, and examining the female stereotype, I know there’s reason behind it all.

“I love fairytales,” Wendy tells me. “I love myths, but I think most of us are aware now of how the [females in] fairytales little girls [are familiar with] tend to be very, very passive.” Didn’t I tell you there was reason behind it all? Let me put it a wee bit more plainly: Wendy wrote a script that challenged fairytales and archetypes.

“I wanted to play on the fairytale trope with a female heroine who is not going to be quite like those in fairytales.” And that heroine? That’s Anne. Now, you get me? When you see this on Friday or Saturday, you tell me Anne isn’t that.

Only a beat passes as Anne and Julie suss out that character note. Then, before too long, everyone snaps back into position and the reading continues. I can tell that Julie and Wendy are in sync with each other. When Julie whispers something quickly to Wendy before the group digests a bit more feedback, I’m reassured of that special kinship. “Yeah, I like that,” I hear Wendy say to Julie before they tackle a few more observations with the actors.

It’s apparent they’ve worked together before. Well, and all right, all right, it’s true. “I am lucky because I have worked with Julie for a long time,” Wendy tells me after rehearsal. “We worked on four solo shows of mine, several plays… She told me about the [Play-by-Play] program and I also came out to see Outside Mullingar when Julie directed it and I just fell in love with the whole place.” You hear that theatre world? We’re loved. Don’t be jealous.

The cast continues to run through the rest of the script. After the last line is read, Julie resets them and runs what I will call “choreography.” You can tell that rehearsal is nearing an end as the cast relaxes and loosens up after finishing the script pages. The five actors for act one are seated in the chairs against the front wall as Julie directs them one by one to entrée on certain cues. They play around with this dance for the last few minutes of rehearsal and as I glance over to the table where Julie and Wendy sit, there’s an aura of productiveness. So much had been done.

“As much as I loved writing, I spent a lot of time in my room alone,” Wendy confesses. “So for me to be able to be in a rehearsal space with the director with the actors, it’s why I wanted to do this.” From the beginning, before starting the Play-by-Play process, there were already things Wendy knew she wanted to change up. “Some of which we’ve already changed – that makes me so happy,” she says. (I told you there was productiveness.)

Its a few minutes to; Julie begins to wrap it up. “How’s it going,” she asks the cast, possibly fishing for any last thoughts for creative feedback on each of their characters. As I jot down a few things in my notepad, I’m prompted to look up again as I hear, “I don’t think we should play that your face doesn’t move.” And the next thing I know, Tom O’Keefe (from PTC’s not-too-long-ago production of The Curious Incident of the Dog in the Night-Time) is pulling back the skin on Nicole Marcks’s face as she tries speaking her lines by playing someone with too much plastic surgery. The cast already feels like a family. “I feel very lucky to be doing this with this group of people,” Wendy affectionately tells me.

Oh, but not this blog post because I was told to mention this… Chateau Marmont, please consider Perpetual Girl as the very first play production to grace your venue. It would be a dream-come-true. Pretty please?