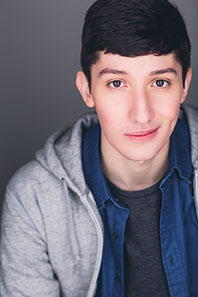 How does someone get to be a Newsies, anyhow? We had a moment to talk with Stephen Michael Langton who plays Davey in the cast. Stephen comes to PTC familiar with the role, as he had the opportunity to perform as Davey around the country in the First National Tour of the show. We had the chance to ask him how that came about.

eBackstage: Can you tell us more about how you came to be involved in theatre? Did you see a production of something when you were a kid? How did you end up going that route?

Stephen Michael Langton: My mother introduced me to musicals at an early age; old movie musicals and shows like Into The Woods, and I instantly fell in love. I began dancing at the age of 8 and then as I got older I started auditioning for local theaters in my hometown in Texas. When I got into high school and looking into what it was I wanted to study in college, I realized musical theatre was my passion and I went to Pace University to study in New York City.

eBackstage: What was your experience like, jumping from college into an actual career?

SML: It was slow going at first, or so I thought. College was a constant flow of things to do and shows to work on, but then once it’s over it’s easy to get impatient. I did some non-paying gigs and concerts, and then got my first paying job working on a Disney Cruise ship about a year out of school. I realize now that I was fortunate to get work so young, but for a 23-year-old kid with dreams of Broadway, a year felt like an eternity!

eBackstage: Obviously, you’ve been Newsie-ing for a long time now — what was the audition process like, and how did you react upon being cast?

SML: I had been auditioning for the show since it’s inception at Papermill Playhouse in 2011. Then, over and over again when it transferred to Broadway. I kept finding myself in the right room, but not getting the job. I went on a cruise ship job for close to a year and when I came back I got a call to audition for a principal replacement on the National Tour. It was only a couple of days until I got the call that I booked the job, I was standing on the corner of 148th and St Nicholas Avenue (where I’m happy to say I didn’t faint, despite what my brain would have me do) and immediately called my mother. That’s what I do when I get good news, try not to faint and call my Mom.

eBackstage: What were some favorite elements of touring?

SML: I had never really travelled before, so seeing the country was a huge boon. I was surrounded by a great group of people and doing a show I’d always wanted to do. All in all, I loved every part of touring.

eBackstage: Now that you’re doing Newsies differently than you’ve done it before, how do you adjust after learning something by rote? Do you portray Davey any differently?

SML: Davey is sort of a fish-out-of-water character: he isn’t one of the guys, and he has to earn the respect of the newsboys. For me, that means that every show is a chance to meet everyone on stage and find new relationships among a brand new group of friends. The words are the same, but every night is a different show.

eBackstage: What excites you about the PTC production of Newsies?

SML: Newsies is based on the real life struggles of the newsboys who went on strike in 1899. PTC’s production is very grounded in that reality and honors the bravery of those boys and girls. And I’ve met some of the best singers and dancers I’ve ever seen in my life!

eBackstage: What do you think Newsies has to offer people, as a story?

SML: It’s the classic underdog story. A group of downtrodden kids rising up against the powers that be, not for any grandiose prize, but just for the right to have a seat at the table. It’s based on a real event whose long term effects for workers and children can still be felt to this day. These nameless kids finally have a voice and it’s a powerful one at that.