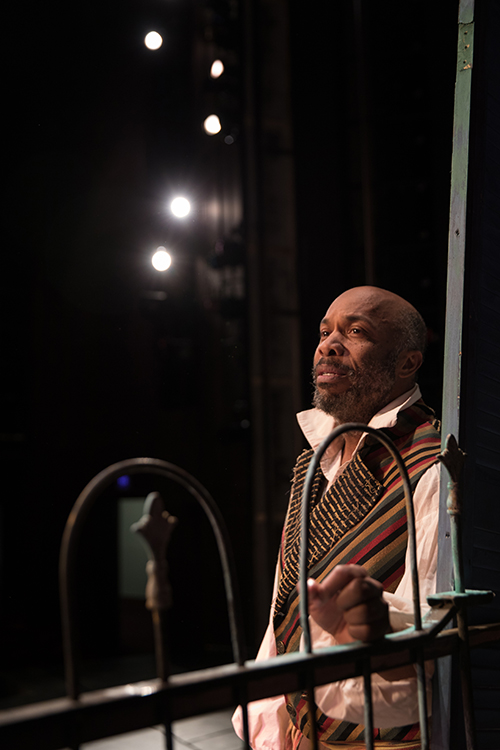 An interview with Richard E. Waits

Firstly, thank you for this interview!

Q: So… it’s impossible to ignore the first line of your biography in our playbill—you danced with Ginger Rogers? At the start of your career? How does that come about, and what was that experience like?

Yes, I danced with Ginger Rogers in a television commercial for a popular theatre chain at the time.

I was hired to be one of “the boys” and my feature was dancing down a curved staircase, arm and arm, you know, “down two, up one, step step, sway sway”?

Ms. Rogers was wearing a flowing black and white polka-dot dress, I was in a black tie and tails, ala Fred Astaire!

She was the epitome of what I am still working on to be.

She knew, sound, lights, direction, editing, she did it all.

And most importantly, she knew the difference between the star and herself. “What you saw today was Ginger Rogers, but now, I’m just an old lady and a grandma, thank you.”

Q: You’ve worked so extensively, your career has included everything from Broadway to a one-man show. Is there something special, though, about Shakespeare? What made Twelfth Night, and the role of Feste in particular, exciting to you?

Working on Shakespeare and Feste in Twelfth Night is absolutely thrilling. I find his work to be deeply layered, multifaceted and completely human. Feste is a huge undertaking for me, since his function in the play is to be many things… teacher, host, entertainer, moral compass, it is never-ending.

The role came to me via an audition request from Bob Cline, Pioneer Theatre Company’s casting director. He said, “You’ll be auditioning for the Emmy Award-winning director, Larry Carpenter; he LOVES theatre, so you’ll be in good hands!”

Q: Speaking of Feste, you’ve written the original music for your character, which is a crucial tone-setter for the play. How did you come to music composition? Have you written anything we might recognize?

Writing the original music for Feste was an interesting challenge, because I didn’t know the character at first, and because all theatre is a collaborative effort. I knew he needed a catchy, memorable melody to be his theme song, and the other songs needed to address the time period indirectly with a soulful underpinning, because our play takes place in 1812 New Orleans.

So, the show’s composer, Scott Killian, and I would meet, and we’d talk about Larry’s vision. I would go home and let the “notes work me” until a melody, a feel, would appear to me, like magic. I then recorded several demos of each song and would send them and they would choose whichever supported the play best.

I hear, in my mind, a full orchestra, all the parts, the horns, strings, bass, percussion and rhythm!

You might recognize my Maxwell House Coffee theme music. It was very formula based, like writing a James Bond movie theme song; you have certain chord structures you need to adhere to. What an honor for me!!

The most valuable lesson I learned was to know, give room for and understand that they are just people with all the idiosyncrasies that are sewn into the human fabric. There is absolutely no difference in working with this company; we are such a fantastic mix of talents and experiences all thrown into the “gumbo” that is our Twelfth Night.

Q: Amid a long and successful career, are there any productions that stand out to you as being especially impactful on you, whether on you personally or on your career? And do you have any idea of what you’d like to try in the future, after this stint with the Bard?

I have had so many highs and lows in my career.

A few things stick out: auditioning for the late great director Mike Nichols and being his number one pick for a major film role, until they changed the location, so I wouldn’t fit the vision.

Writing the book, music and lyrics for my solo show Mama Rose, a dark comedy which deals with the powerful themes of spousal abuse, mental illness, survival, the class system and all the things we hold near and dear to our hearts. It was presented at Dixon Place and the famed La MaMa in New York City, directed by Paul Stancato.

Having a drink with a group of firemen, who also sang together as a yodeling group! (Who would know?)

Speaking to my dear uncle about my family’s history, which he tells me has some roots here in Utah! He told me I must visit the LDS Family History and Genealogy Library!

Talking to a cashier here in Salt Lake City, who noticed I appeared stressed, and she told me, “You know, you don’t have to face every day.”

Regarding the future, I’m hoping for some musical theatre roles that I’m dying to play, such as Sweeney Todd in Sweeney Todd, Billy Flynn in Chicago, Harold Hill in The Music Man, George Washington in Hamilton.

I would like to be a regular, co-star on a hot sitcom, for the experience.

I’d love to see my recurring dream of winning a Tony Award for Best Featured Actor in a Play or Musical become a reality.

And, lastly, I’m working on bringing Mama Rose to film.