Stripes: More Than Meets the Eye

Oh, I can see us now

In our bathing dresses

You in a nice navy

Stripes have held an unusual place throughout history. They designated the “deviant” from the normal, qualifying women as prostitutes or men as jugglers. In creating the costumes for Sweeney Todd: The Demon Barber of Fleet Street, Brenda Van der Wiel decided to utilize its iconography and create not only an intriguing costume, but also a visual story.

Where did the influence of stripes come from?

“Actually Karen [Azenberg, the artistic director] wanted the stripes because that brown and black stripe is a really steam-punk image”, Van der Wiel notes, “and then it sort of evolved into being on everybody because I just read this book, The Devil’s Cloth: A History of Stripes and Striped Fabric”.

The Devil’s Cloth: A History of Stripes and Striped Fabric is about the evolution of stripes and striped fabric, and how they had a lasting impact.

“Sometimes prostitutes, sometimes the jugglers and clowns and sometimes the hangmen were required to wear either an entirely striped suit clothing or more often an item of striped clothing: a scarf or dress for prostitutes, breeches or hoods for hangmen and doublets or hats for jugglers and clowns – so it was a matter of the world being able to see what you did and not getting these kind of people confused with citizens.”

“And pre-Victorian and into the early Victorian, you were really only supposed to have any fabric that touched your skin or your body be white or undyed and so as people started becoming a little more rebellious they started putting teeny tiny little stripes into their petticoats or breeches (or underwear) to be rebellious in that way.”

“So, having had read this book a while ago, I just remembered that and then we started talking about how these people [in Sweeney Todd] are all on the edges of society and as everybody gets into this whole story they become more and more deranged.”

In designing each costume, she found a way for the stripes motif to hint at a character’s personality. For example, “I think the Judge’s probably are the most subtle of the principals just because he’s trying to not show his hand and so his are more in his tie and his lining and they’re much more subtle.”

“The Beggar Woman is Lucy in the flashback, and she’s the only one that doesn’t have any [stripes] so she’s kind of the only “pure” person in the show.” 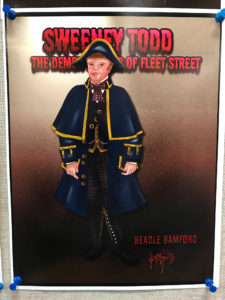 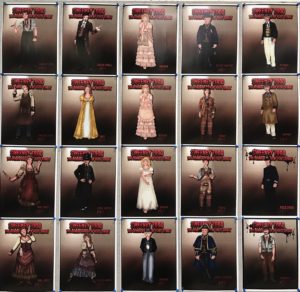