Director’s Brief: Back from New York…

I write this at 30,000 feet—returning from a busy week in New York where the temperatures were frigid!

I saw four shows: Prom, Choir Boy, Network and King Kong. Four very different kinds of show; two musicals, one play with music and one play. Network and King Kong take advantage of some amazing theatrical technology. Video and projection components were prominent design features—and confirm that projection design will be a critical part of theatre design in the coming years.

King Kong is mostly notable for the puppetry of its title character. It takes a dozen or so synchronized artists to make Kong move and speak. They’re the hardest working folks on Broadway right now. Altogether, it’s an old-fashioned musical that fails to get the audience invested. The only thing you want to watch is the monster.

Network, featuring an outstanding performance by Bryan Cranston, is a new stage adaption of the film Network. The staging incorporates live camera work, so much of the action is also seen on various TV monitors placed around the theatre, along with a giant projection screen onstage. It certainly gives one the feeling of being in a television studio… But I was disappointed in myself for watching the screens and not the live actors.

Maybe, as my iPhone app reminds me once a week, I’m addicted to screen time…

Back in Salt Lake, I know the cast of Once was hard at work. The shops are installing the revolving set and fitting costumes. I can’t wait to get there and see what’s been going on. 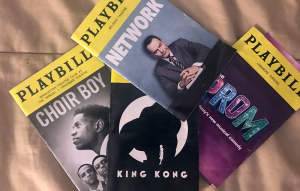