Opening Night Blog: Once Upon a Time

Home Blog Opening Night Blog: Once Upon a Time

Our intrepid Opening Night blogger Lansia Wann wanders into the cast party after each opening with some weighty thoughts, enlisting the cast and staff’s input. Here’s the ONCE edition. 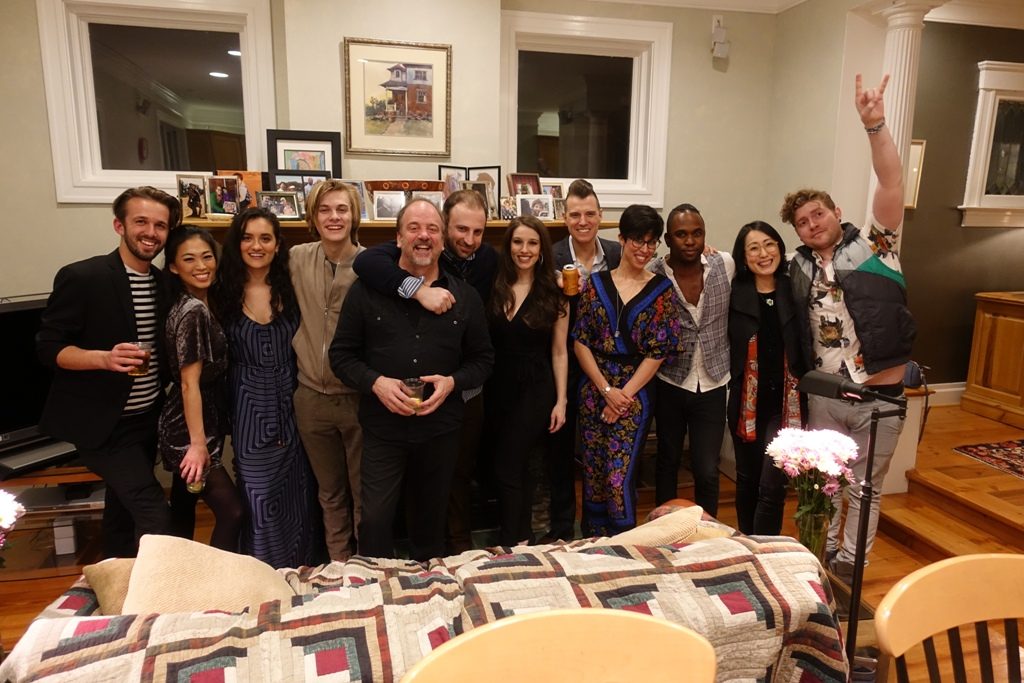 Once Upon a Time…

It’s impossible not to think back on previous jobs when you’re trying to find one in the present. Tell me I’m wrong, and prove it because I want to know how it’s done (helpppp meeee)! You reminiscence, for better or worse, on all the responsibilities you’ve had, the accomplishments you’ve made, the skills you’ve honed, the friends you’ve acquired, the mistakes you’ve corrected, and so forth… It becomes prep for an interview, bullets for a customized resume, or perhaps just usurping nostalgia as your mind wanders.

I can certainly say that I’ve been thinking of my old positions quite often as I’ve been on that dreaded hunt to find a permanent one. So, of course, the moment that Guy belts out “Broken Hearted Hoover Fixer Sucker Guy,” while the audience is caught in a whimsy, all I think of is how he already had a job and how Glen Hansard skyrocketed his career with Once. Aw, man! How I long to find an end to the job search or find that one Oscar-worthy moment to skyrocket my career!

So, I thought to myself, curious about everyone’s beginnings before their highly prestigious positions at the amazing regional Pioneer Theatre Company production of Once… What was their beginning? What were some of their first jobs? There’s got to be something juicy in there, right? Something incredible before their venture into the creative field of theatre? Well, let me tell you…

Not surprisingly, much of the cast mentioned beginnings in food. EJ Zimmerman (Reza) worked a lot at restaurants after her first job at the Gap. “It was actually a great gig because… I got to buy clothes at a discount and eat lunch at the mall,” she told me. Zander Meisner (Svec) started as a Starbucks barista in his junior year of high school, senior year in high school, and even the start of college.

A little less traditionally, Cody Craven (Andrej) grew up on a chicken farm and, naturally, was an egg delivery boy. “I drove dozens of eggs to doorsteps about fifteen minutes from where I lived, every Wednesday and Saturday,” he explains. “Then, I would have to go and pick up empty cartons on opposing days.”

Chris “Red” Blisset (Billy) also worked in food, but not quite the way you think. He tells me, “For about six months, I booked the bands at a bar run by the Russian mafia in New York City.” Though, it didn’t last long because he “had a partner who had kind of a big mouth so we quit because I thought he was going to get us killed.”

When Roderick Lawrence (Guy) moved to New York, he took a job delivering empanadas. “Not only did I deliver empanadas but I lied about being able to ride a motorcycle,” he says noting that the motorcycle was the delivery vehicle. Everything went well the first day, but on that second day of the job… “I was flying through traffic across the Queensboro bridge and I fell.” About 30 empanadas ended up splattered all over him so, he returned to the store and confessed.

Riley French (Emcee) is currently a bartender in Ogden (order a smoked old fashioned from him rather than an AMF!). However, before that, he worked at an outsourcing company in Phoenix. “All I did was scan W-2s for employees into the system,” he says. “I did this everyday and that’s actually how I paid for my first guitar!”

Others also found stepping stones in their first jobs. Hillary Porter (Girl) was a wakeboarding instructor at an international summer camp in Maine. As a participant first at the age of 10, she met people from all over the world and started unconsciously mimicking their accents or picking up jargons from their conversations. “It’s helped so much with the show because… I got used to picking up on these sounds from different accents,” she explains.

Maya Bassuk (Ex-Girlfriend) was also a summer camp counselor in high school. As a piano and voice teacher, Maya says her experience working with kids and teaching has “helped me be a music teacher.” She also hopes to be soon teaching violin (watch the show and you’ll see why I mention this!). Ask her for the Suzuki method on Suzuki method of acting special. This could be the next new thing, I hear.

During her days at BYU, Mary Fanning Driggs (Baruska) sang for a living…. Though, often dressed like an Idaho potato. “That was one of the most popular costumes,” she tells me. And another “was a cupid, which did involve a diaper.” Mary sang telegrams, and practiced oftentimes on her moped in costume on the way to an unsuspecting office or classroom. “It was horrible but I paid for my husband’s wedding ring that way!”

Britton Gardner (Ensemble) confessed to me that he enjoys film more than theatre. Could working in a movie theatre have caused him to realize this dream? Although his first job was working at the Shakespeare Festival, his first “traditional job” was working at the cinemas. He didn’t get fired, but “it didn’t stick.” And he’s currently applying to film schools.

A couple other jobs from the cast include:

But, I save the best for last. Director Pirronne Yousefzadeh previously worked at a deli, and she even did telemarketing for Lincoln Center. However, her most memorable job was for the American Bible Society. “My job was to input feedback from prison inmates about receiving a bible – what it meant to them and how it impacted them to receive their bible.” It was “this weirdly bureaucratic job but with this incredibly confessional content.” Yep, no one could top that at the opening night party… And I’ll tell you what… I used to sell vacuums.

Catch Once at the Pioneer Theatre Company until March 2, 2019. Buy your tickets here. Watch the movie here. Then catch Glen Hansard on tour here. And learn more about Marketa Irglova here. Most importantly, feel free to send me job opportunities here.