The cast of “The Murder at Haversham Manor”: Chris

Home Blog The cast of “The Murder at Haversham Manor”: Chris 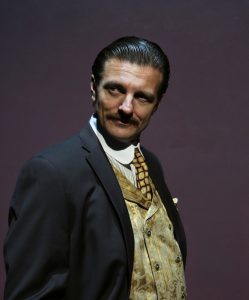 CHRIS DANIELS (Inspector Carter) Chris is the newly elected head of the Drama Society. For tonight’s show, he served as the voice coach, dialect coach, fight choreographer, casting director, and costume designer. He also plays the lead role and, of course, directed. The Society would like to thank Chris for his remarkable passion and efforts. Credits within the University: Hamlet in Hamlet, Macbeth in Macbeth and Othello in Othello.