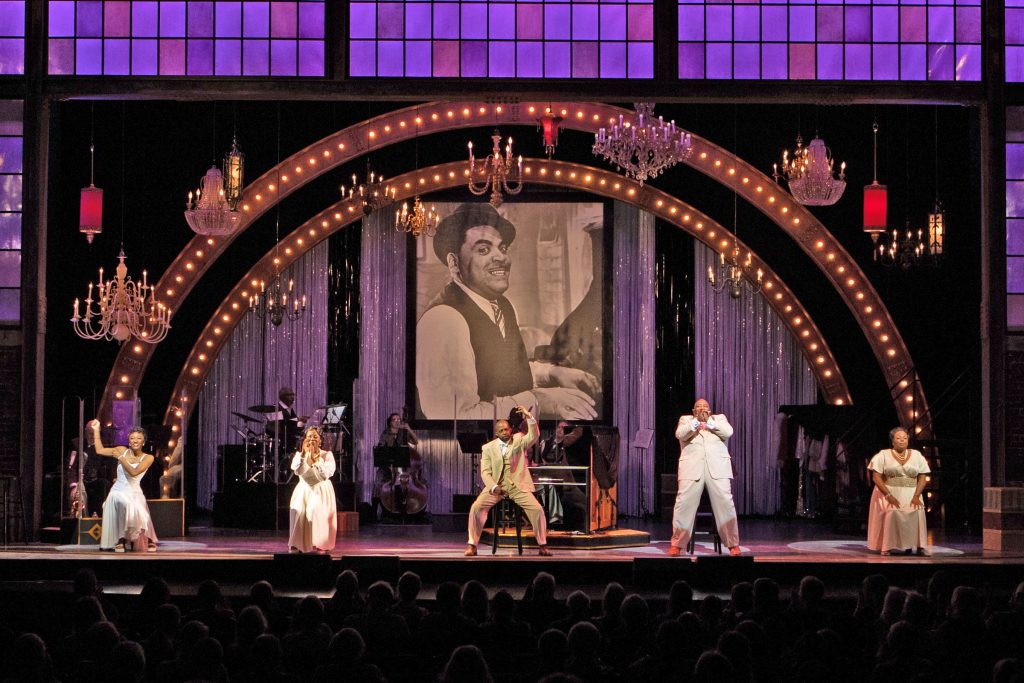 The pandemic has hit many businesses in different ways. For theatre, it made typical day-to-day business operations come to a halt, and beautiful set designs left untouched for over a year and a half.

In March of 2020, the production of Ass, written by Ellen Simon and directed by Pioneer Theatre Company’s Artistic Director Karen Azenberg, was approaching its World Premiere. Scenic designer Jo Winiarski had been contracted to create the design for the play about a dysfunctional family and their complicated relationship with the family’s patriarch, a brilliant sculptor in failing health.

Unfortunately, due to the pandemic, Ass did not get its World Premiere in 2020. Winiarski recalls, “The set was fully designed and was being installed. We were less than a week away from starting technical rehearsals when the shutdown order came. At the time, no one knew how long theater would be closed. The warehouse portal (the set for Ass is a loft apartment in NYC) had already been installed. The portal has been sitting on stage ready the whole time.”

Jo Winiarski is an accomplished scenic designer who has worked for Off-Broadway productions and has with many New York credits to her name. Her regional design credits include the Utah Shakespeare Festival and the Oregon Shakespeare Festival to name a few. She worked as art director on “Late Night with Seth Meyers” and received an Emmy nomination for “A Colbert Christmas: The Greatest Gift of All.”

Two years ago, Winiarski and her husband moved to Utah after twenty plus years in New York City.

“My husband and I were ready for a change and we looked around Utah and found Ogden. I love being outdoors and running, so the easily accessible trails were a big draw for me.”

While shows were on pause, Winiarski was asked to design this past winter’s Holiday Windows at PTC.

When it came time for the return to theatre, the concert musical Ain’t Misbehavin’ was listed as the season opener. In Ain’t Misbehavin’, the Harlem Renaissance comes to life as five performers take a journey through the timeless music of Thomas “Fats” Waller, the stride pianist and composer who became a Harlem legend in the 20s and 30s. The rowdy and upbeat musical aspires to keep spirits high even as community health concerns continued.

It was Azenberg who proposed incorporating the Ass set into the design for Ain’t Misbehavin’. “The idea for all of our concert productions is to incorporate scenic elements from the show that will follow the concert, in this case the oft postponed Ass. It was also my desire to share with our audience what our theatre looked like over the 18 months they were not with us, that beautiful industrial portal was there waiting for our return and so keeping it as part of the design was a gentle nod to the journey, we all made”, says Azenberg.

Knowing it wouldn’t move, Winiarski designed the set with the portal in mind.

“The portal has a warehouse window vibe and can easily change color with light, so it had some flexibility to find itself in a musical,” said Winiarski. “The two gold arches that fly in during Ain’t Misbehavin’ are inspired by the period research I did of jazz clubs. I then gave them a slight industrial flair so that they would refer to the portal that was still waiting for its audience.”

Other upcoming productions were also taken into consideration when working with the set for Ain’t Misbehavin’ and the set for the upcoming Ass.

According to Winiarski, “when you first enter the theater, you can see the other set pieces for Ass in the wings. You can also get a sneak peak of some Elf pieces being built.”

“When designing the show, I didn’t know what Elf pieces would be under construction when, so we set a loose “backstage look” (setting ladders, hampers, etc.) that will always be the same, but some of the opening look evolves as the shop continues to shuffle scenery as they build Elf,” said Winiarski.

PTC’s production of Ain’t Misbehavin’ opened on September 10th to positive reviews, many of which mentioned the beautiful set including a ceiling dripping in 18 sparkling and stunning chandeliers. Winiarski recalls the conversations she had with Azenberg and Gerry McIntyre, the Director/Choreographer, about the set design.

“Karen said they often try and pull a lot of the pieces from stock. I really wanted this show to go from a stage with a ghost light, waiting for performers to return, to a bright lit up sparkling joyous visual. I asked Laura Walters, the properties head, how many chandeliers Pioneer had in stock, I think I hung all but two! I was looking to make a ceiling of light.”

The World Premiere for Ass is finally happening. It is currently in PTC’s lineup as the second production of the 2021-2022 season with an opening date of October 22nd and running through November 6th. The actors who were originally cast for the 2020 production are returning, and PTC’s Azenberg is still set to direct. It’s safe to say, the staff at PTC will be relieved to finally see the play take the stage.

Purchase tickets and view the other upcoming productions at pioneertheatre.org.

When the 2020 World Premiere of ‘Ass” was postponed due to the pandemic, the set went unused until pieces were incorporated into the 2021-2022 season opener ‘Ain’t Misbehavin”.