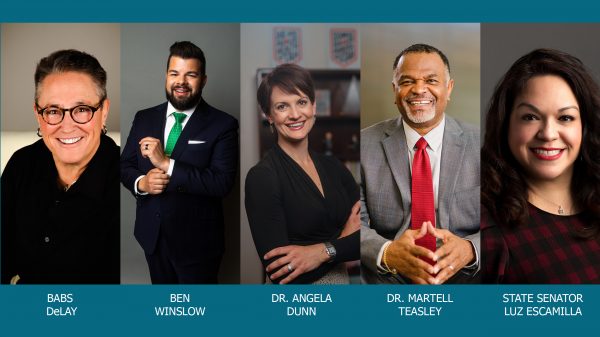 Salt Lake County key health official, Dr. Angela Dunn is joined by four other well-known leaders in the community for brief, but fun, on stage role in the season’s closing musical.

Pioneer Theatre Company (PTC), nearing the end of its 2021-2022 season is ready to open one of the most enduring Broadway hits, HELLO, DOLLY!. They thrilled local audiences with the announcement that the iconic role of Dolly Levi would be played by Broadway star and award-winning TV host PAIGE DAVIS during its May 13 through May 28 run.
But that’s not the only surprise Salt Lake’s professional regional theatre has kept hidden under its hoop skirts. The brief role, in Act 2, of THE JUDGE will be played by a rotating cast of some of Salt Lake City’s most notable leaders in county government, the University of Utah administrative branch, journalism, business, and the Utah State Legislature.
DR. ANGELA DUNN, former state epidemiologist who is now the Executive Director of Salt Lake County Health, takes her turn on stage along with DR. MARTELL TEASLEY, Interim Senior Vice President of Academic Affairs and Provost for the University of Utah; BABS DELAY Principal Broker and owner for Urban Utah Homes & Estates; State Senator LUZ ESCAMILLA; and Fox 13 reporter BEN WINSLOW.
Each guest artist will appear in three evening appearances and one matinee. Dr. Teasley will open the run with appearances on May 12-14; Dr. Dunn will be on stage May 16-18, including our Wednesday Student Matinee; Babs DeLay will take the May 19-21 shift, followed by Luz Escamilla May 23-25, and the run will end with Ben Winslow, May 26-28 on the closing weekend.
“We thought the community would enjoy seeing some of its most well-known and beloved members show up on stage, somewhat out of their element,” said PTC Artistic Director, KAREN AZENBERG, who made the decision to cast the (mostly!) novice actors. “I want to thank these very busy individuals taking time out of their lives to provide our patrons with some unexpected fun.”
BIOGRAPHIES

DR. MARTELL L. TEASLEY (The Judge, May 12-14) is Interim Senior Vice President of Academic Affairs and Provost after joining the U of U as dean of the College of Social Work in 2017. Prior to earning a slew of degrees, including a PhD in social work, he served in the U.S. Army for 10 years, participated as a Licensed Practical Nurse in the First Persian War, and went to Drill Sargent School. Those things prepared him for a career as a Production Stage Manager, not as an actor, but you have to start somewhere, right?

DR. ANGELA DUNN (The Judge, May 16-18) is the Executive Director and Health Officer for Salt Lake County Health Department. Dr. Dunn has no theatre credits to her name but has an extensive background in television, having starred in a weekly series last year called, “The Covid Update.” She began her career as a seaman on an oil tanker, chipping the paint and mopping the deck while enroute to Valdez, Alaska, and probably around mid-2020, that must have seemed like a really great job.

BABS DELAY (The Judge, May 19-21) is no newcomer to the stage. They replaced Roma Downey in the Broadway show, The Vagina Monologues, and then produced/directed it in Utah for 20 years. Because all actors need a side hustle, Babs’ is being one of the most successful real estate sales agents in Salt Lake for 38 years, a fact more impressive when you realize this includes years when they were giving houses away on every corner. Babs is a spouse, a parent, and a grandperson of four grandkids, as well as a life-long Girl Scout… leaving us wanting Samoa.

SENATOR LUZ ESCAMILLA (The Judge, May 23-25) is the first Latina elected to the Utah State Senate and the first immigrant elected to the Utah State Legislature. She is now serving her fourth term and is the Senate Minority Whip. She is on the boards of Primary Children’s Hospital, Days of ’47 Rodeo, The Huntsman Cancer Institute Advisory Board and Hale Centre Theater (but who put you on stage, huh?) Her experience in acting, other than on the senate floor, consists of a Spanish speaking theatre group at the U of U while in college and consuming Korean and Chinese dramas. So, watch out; she may bust out a K-POP tune if she forgets her lines.

BEN WINSLOW (The Judge, May 26-28) has been an on-air reporter for Fox 13 for over ten years, earning a national Edward R. Murrow award, and honors from the Utah Broadcaster’s Association and the Society of Professional Journalists. He worked as a part-time model during the pandemic, showcasing the latest PTC facemasks. He’s received more “Best of TV News” awards from Best of Utah than John Saltas can possibly keep track of. This is Ben’s acting debut since he bombed junior high school theater which clearly is the only thing he hasn’t succeeded at.