Interview with Kareem Fahmy: Playwright of A Distinct Society 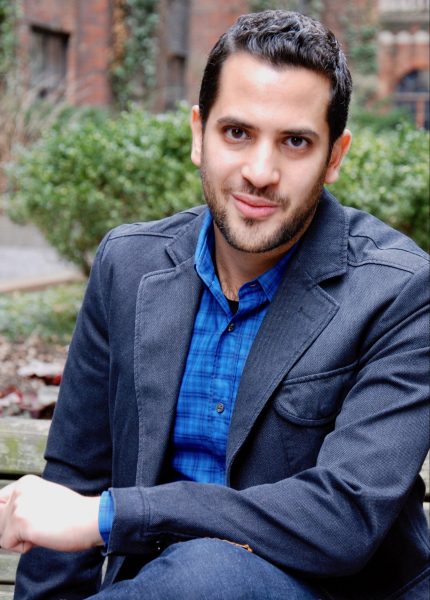 Kareem Fahmy is no stranger to PTC. The director and playwright was last here when he directed the 2022 production of Fireflies by Matthew Barber. He also directed the Play-by-Play reading of The Fifth Domain by Victor Lesniewski in 2019.

Fahmy is now back with his new play, A Distinct Society, about a library that straddles the border of U.S. and Canada which becomes an unlikely crucible for five people from around the world when an Iranian family, separated from one another by the “Muslim ban,” uses the library as a meeting place. Soon a librarian, U.S. border patrol officer and a local teenager must choose between breaking the law and saving themselves.

We chatted with Fahmy about this upcoming play, which will have its World Premiere at PTC on January 27 and will run until February 11, 2023.

What was your inspiration?

Like so many members of the Muslim American community, I was disturbed by the so-called “Muslim ban” and the growing isolationism and xenophobia of American society. When I came across the story of the Haskell Free Library and how it functioned as a “safe space” for families separated by the ban, I was moved by the hopefulness of the situation and immediately knew I wanted to write a play about it.

The United States has almost 7,500 miles of border with Mexico and Canada. Why did you choose this location to place your story?

The Haskell Free Library is a special place: it’s a building that’s literally cut in half by the U.S./Canada border. There’s a line of tape running through the center of one of its main reading rooms (the entire play is set in that room) that indicates where the border is. I actually grew up about 30 minutes away from the library, in the southeastern part of the province of Quebec. This area of the world and its people are very well known to me. I was so intrigued by the fact that people from all over the world were traveling to this very out of the way place that’s practically in my childhood backyard.

What do you hope patrons will take away from this play with regards to immigration and the discriminatory beliefs it may prompt, and the lives it affects?

I’m rarely interested in plays that are overtly political in theme or content. When I’m an audience member, I don’t like to be “taught” I want to be moved and develop real empathy for the characters. With A Distinct Society, I chose to focus on how larger political forces—including border and immigration policies, nationalistic policy decisions, and racial profiling—affect the day-to-day lives of people. The five characters in this play have been shaped in part by these forces that are so much larger than they are, and I wanted to show the human level of intergovernmental politics.

How did you research this script? What resources did you use?

I read quite a bit about the library, listened to interviews with Customs and Border Patrol officers, researched the ban, etc. However, as the characters in the play are entirely fictional, I mostly created the play from my imagination. The history of Quebec separation and the 1995 referendum on it, which is a major plot element in the play, is something I lived through as a young person and had a major effect on my life, so all of that content came from my memory.

Are there many places like The Haskell Free Library along the U.S/Canada border or U.S/Mexico border?

There are a handful of other similar places (one I believe in British Columbia).

The “Muslim Ban” was in effect from January 27, 2017, until March 6, 2017, when it was superseded by Executive Order 13780. Do you have any personal experiences when it came to this travel ban? Or knew anybody who did?

I actually have a theatre colleague who met her family at the Haskell Free Library. I found this out after I had written the play. This place means so much to so many people, and while the ban is thankfully in the rearview mirror (for now) the larger forces that led to it being created are still very much influencing the lives of Middle Eastern people both in and out of the U.S.

You can see the World Premiere of A Distinct Society at Pioneer Theatre Company January 27 through February 11, 2023. Purchase season subscriptions here.