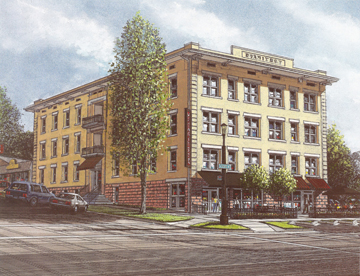 To produce theatre for Utah audiences at the highest professional level, Pioneer Theatre Company casts its shows using the very best talent from Utah and New York. When PTC hires actors, directors and designers from out of town, the theatre is required to provide them with housing. During a seven-play season, the theatre will employ approximately 120 guest artists from outside the state. Over a ten-month period from August through May, the theatre requires roughly twenty apartments to meet its artist housing needs.

For many years, the theatre has been looking to own its own housing at a location close to the theatre. In 2009, PTC identified a building that fit our size and proximity requirements; and once renovated, would be a wonderful asset to the neighborhood and community as well. That building, now called Meldrum House in recognition of the generous lead gift from Peter and Catherine Meldrum, is located at the corner of 200 South and 1300 East.

The original University House, as it was first known, was built in 1907. By 1909, it was being used as the dormitory for female students enrolled at the University of Utah—the first such women’s dormitory west of the Mississippi. In recent years, the building has been rented out as boarding rooms.

Housing inquiries: Meldrum House has been built to house the visiting artists, directors and designers who work at Pioneer Theatre Company. Meldrum House will generally be heavily occupied by our guest artists through the theatre season. There may be some apartment availability that allows for short-term rentals by guests outside of the theatre community, particularly from late May through mid August.