Set in a small library on the border of Vermont and Canada, the new work explores effects of the Trump-era Travel Ban on an Iranian family and surrounding community 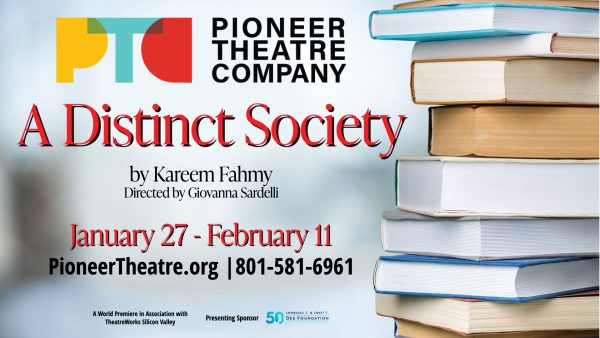 A sleepy library that strategically straddles the U.S. and Canadian borders becomes an unlikely meeting place for separated families. Winner of the Next Act! New Play Summit, Fahmy tells the story of five people from different countries and cultures choosing between breaking the law or saving themselves, while trying desperately to understand one another. Alliances are built and broken, borders are straddled, but love and human connection prevail.

Kareem Fahmy is an award-winning Canadian-born playwright and director of Egyptian descent. He has worked previously at Pioneer Theatre Company and around the country— including Artists Repertory Theatre, City Theatre, InterAct Theatre, TheatreWorks Silicon Valley, Writers Theatre, Atlantic Theatre Company, Denver Center, and Northlight Theatre. He is the Co-founder/Chair of the Middle Eastern American Writers Lab. He holds an MFA in Theatre Directing from Columbia University.

“I’ve had the privilege of working as a director with PTC over several years now, first with the Play-by-Play development program, then the virtual A Christmas Carol, and most recently with last season’s Fireflies. To now have my playwriting work supported by this tremendous organization is a true honor and demonstrates Karen Azenberg’s deep commitment to fostering the next generation of theatre artists, particularly those from under-represented communities like my own,” said Fahmy. “Pioneer is one of the few theatres of its size committed to producing world premieres by early-career playwrights on a large stage and with the finest directors, designers, and actors from around the country. A Distinct Society is a deeply personal play, set a stone’s throw from my hometown, and I’m thrilled to be inviting Utah audiences into my little corner of southeastern Quebec.”

The cast is comprised of five actors, each of whom are making their respective PTC debuts: Vaneh Assadourian (audiobook narrator of Son of the Salt Chaser by A. S. Thornton,) as Shirin, Corey Jones (The Book of Mormon National Tours; A Few Good Men, La Mirada) as Bruce, Abdullah Khalil (S.W.A.T. on CBS; The Adding Machine, Bonstelle Theater) as Peyman, Carrie Paff (About Alice, Theatre for a New Audience; Ideation, 59E59) as Manon, and Emmet Smith (A Midsummer Night’s Dream, Theatre for a New Audience; Soul Doctor, New York Theatre Workshop) as Declan.

A Distinct Society is helmed by Giovanna Sardelli, who is the Director of New Works at TheatreWorks Silicon Valley. She has directed and developed plays around the country, including many off-Broadway productions. Her production of Joseph’s Guards at the Taj for the Geffen Theatre which won the 2016 Ovation Award for Best Production of a Play. Sardelli holds an MFA in Acting from New York University’s Tisch School of the Arts and taught in NYU’s Graduate Acting Program as well as its Dance Department for over a decade.

Immediately following the 2 PM matinee on Saturday January 28th, Pioneer Theatre Company will present “Cause + Effect: A Town Hall Exploration of the Themes of A Distinct Society.” The free event will feature panelists Amos Guiora (Professor of Law, S.J. Quinney College of Law), Alborz Ghandehari (Assistant Professor, University of Utah Department of Ethnic Studies), and Cherie Willis (Librarian, Salt Lake City Public Library). Town Hall attendees who are not planning on attending the January 28th matinee, should plan on arriving at Pioneer Memorial Theatre by 3:30 PM and will be seated following the performance.

A Distinct Society runs from January 27 through February 11 at the Simmons Pioneer Memorial Theatre. Tickets are available at PioneerTheatre.org or by calling PTC’s Box Office at 801-581-6961.

A Distinct Society
by Kareem Fahmy
Directed by Giovanna Sardelli

*Member of Actors’ Equity Association, the Union of Professional Actors and Stage Managers in  the United States.

Now celebrating its 61st season, the award-winning PTC is Utah’s premiere professional theatre company and a leading arts organization of the West. Led by Artistic Director Karen Azenberg and Interim Managing Director Diane L. Parisi, PTC presents world-class productions that celebrate diversity in culture and society, and serve as the connecting bridge between art and scholarship as an affiliate of the University of Utah. For more information, visit  PioneerTheatre.org.