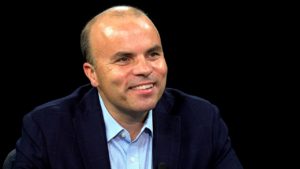 These notes have been adapted from those included in the original Playbill for the Lincoln Center Theater production in March 2017:

In December 2012, after a performance of my play Blood and Gifts at Lincoln Center Theater, I went out for drinks with a Norwegian diplomat who had seen the play at the invitation of my director Bartlett Sher.

In a booth at a restaurant across the street from the theatre, in response to my questions about his work, he spoke about his involvement in the Oslo Peace Accords. I knew about this first ever peace deal between Israel and the Palestine Liberation Organization—signed in the White House Rose Garden on September 13, 1993—which gave us the iconic image of President Bill Clinton presiding over a handshake between Prime Minister Yitzhak Rabin and Chairman Yasser Arafat. But what I discovered that night over drinks is that there was a backstory to this momentous event. Digging further on my own, I learned the full story of how the Oslo Accords came to be—a story that is documented, almost completely unknown.

Oslo is the story of a hidden history that lies behind a public history. But to be clear, it is my version of this history. The events in the play all happened, but locations have been condensed and the chronology of events has been compressed. Some of the players in this history have been excised; some of those who remain have been assigned different roles than their actual counterparts. Though every character in this play is named for a real person the words they say are mine.

Twenty-four years later, the memory of that handshake in the Rose Garden between mortal enemies is still fixed in the world’s mind. But the meaning and legitimacy of the process that led to that handshake remain in flux. Debates still rage about whether the Oslo negotiations were a brilliant masterstroke or a dangerous mistake. Participants and historians still battle over who deserve credit–or blame–for the historic compromises that were made. But both a dramatist and a citizen, I remain gripped by the unimaginable political will it took for those on both sides to create the opportunity for that handshake, and by the courage it took to stand face to face with the enemy as they struggled to find a way forward–together.