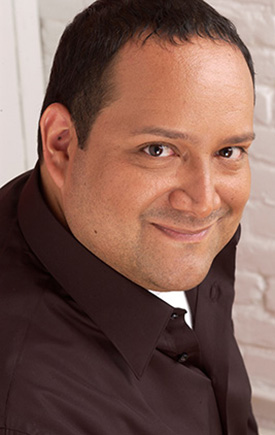 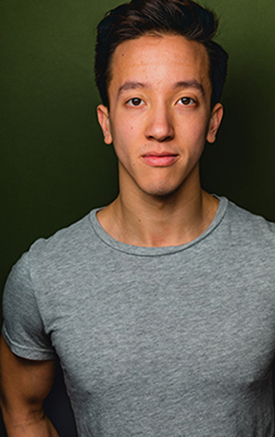 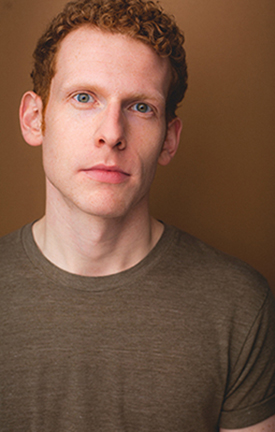 MAX CHERNIN* (Buddy) is a Brooklyn-based actor from Shaker Heights, Ohio. Most recently, he starred in the premiere of Passing Through at the Goodspeed Opera House. Broadway: Bright Star, Sunday in the Park with George (2017). New York: Bernstein’s Mass (Lincoln Center), The Golden Apple (City Center Encores!), Brooklynite (Vineyard), Skittles Commercial: The Musical (Town Hall). Regional: Daddy Long Legs (Theatre Raleigh), Bright Star (Pioneer Theatre Company, Old Globe, Kennedy Center, Center Theatre Group). His solo show, The Color Ginger premiered at Feinsteins/54 Below, and he wrote/starred in Together Again for the Goodspeed Opera House this past July. TV/Film: “Dickinson,” “The Blacklist,” “Mozart In The Jungle,” “The Family,” and Adam Sandler’s The Week Of. CCM Alum. Much love to the cast and creatives, Nicolosi & Co, my family, & T. maxchernin.com 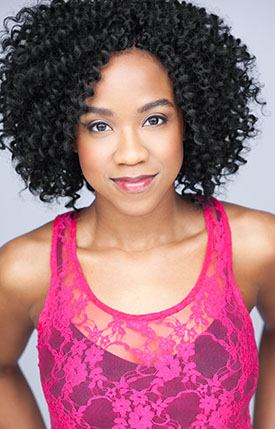 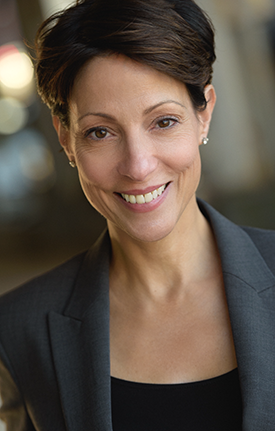 DANIELLE DECRETTE* (Ensemble, Emily U/S) is thrilled to be making her PTC debut in Elf. National Tours: Anything Goes with Leslie Uggams, A Funny Thing Happened… with Mickey Rooney, David Merrick’s 42nd Street (Peggy U/S) International: Showboat (Ellie). Favorite Regional roles include: Cassie in A Chorus Line, Lizzie in Baby, and Rosamund in The Robber Bridegroom. Upcoming Independent films include Elle with Joshua Henry, and Framed (working title). Danielle’s multi-generational play, Sadie’s Day, was chosen as part of Botanicum Seedlings: A Development Series for Playwrights, presented at the S. Mark Taper Pavilion at Will Geer’s Theatricum Botanicum, in Los Angeles. Danielle is a proud member of AEA and Dramatist Guild of America. Unending love to Jed, Julia, Ava, and Natalie and a big thanks to Alan for getting me back on the boards! 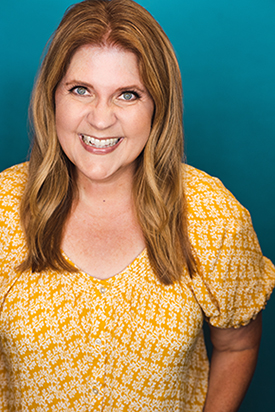 MARY FANNING DRIGGS* (Emily) can’t even express how thrilled she is to be back on this stage! This is her 23rd PTC production, having appeared in such favorites as Mamma Mia! (Rosie), The Last Ship (Regional Premiere), The 25th Annual Putnam County Spelling Bee (Rona Lisa Peretti), Irving Berlin’s White Christmas (Martha Watson), both productions and every performance of Les Misérables (ensemble/Madame Thénardier), Sweeney Todd: The Demon Barber of Fleet Street, and Once (Baruska). Favorite regional and local credits include The Tempest (directed by Tony Kushner), Annie Get Your Gun (Annie Oakley), Joseph…(The Narrator), Once Upon a Mattress (Winifred), Sweet Charity (Charity), and Baby (Lizzie). Driggs maintains a private vocal studio specializing in belt and musical theatre techniques. In her spare time, she loves baking and cooking all the things! Proud AEA member. Many thanks to Karen, Mary C., and the incredible team here at PTC. Insta @marydriggs 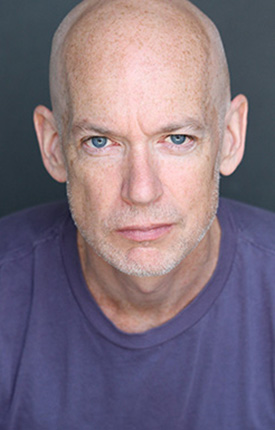 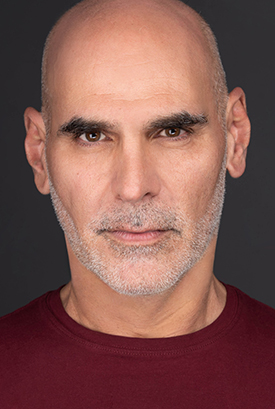 HOWARD KAYE* (Greenway) Howard Kaye happily returns to PTC having performed in productions of Peter and the Starcatcher, The Music Man, It Happened One Christmas, and Oliver. He has appeared on Broadway in Miss Saigon, Off-Broadway in Silence! The Musical and in the original North American Company of Mamma Mia!. He likes Salt Lake the best. He is a graduate of Cincinnati Conservatory of Music and the Juilliard Drama Division. 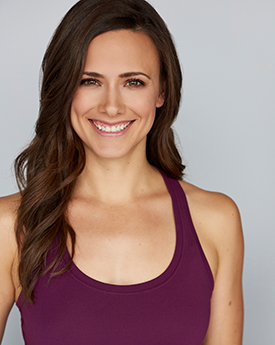 ELYSE NIEDEREE* (Ensemble/Deb U/S) Hello and welcome back to the theater! Elyse is thrilled to return to the stage in her beautiful hometown after two years of not performing. Past PTC credits: Mamma Mia! (Lisa), It Happened One Christmas. Some other fun credits: King Kong, Broadway; Elf The Musical; National Tour, “The Marvelous Mrs. Maisel.” Elyse continuously marvels at the abundance of love and support around her and sends endless gratitude to the team at PTC including Karen, Rommy, Alan, and many others. And most importantly, Elyse would like to thank her brothers and her parents for their endless love and support. 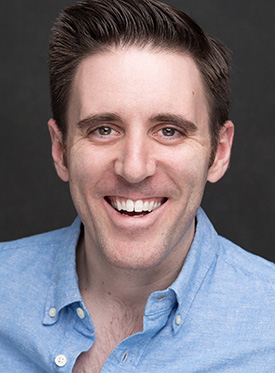 DENNIS O’BANNION* (Associate Choreographer/Ensemble) is thrilled to be making his PTC debut and be back performing again. Broadway: Irving Berlin’s White Christmas. Most recently he played Scuttle in The Little Mermaid at Tuacahn Amphitheater. He was Carbonell-nominated for his performance as Marcellus Washburn in The Music Man at the Maltz Jupiter Theatre. Favorite credits also include Big River (Music Circus), Crazy For You (Maltz Jupiter and Cape Playhouse) and Hello Dolly! (Paper Mill Playhouse) choreographed by Mia Michaels. Thank you Rommy for this opportunity and for all of your support. Love to my family and friends. For Tita Lena, Tita Carmen, and Gpa. 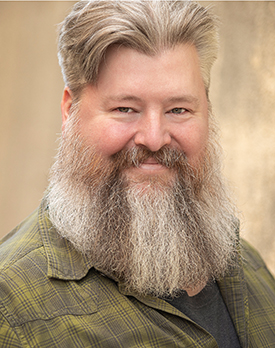 JASON SIMON* (Santa) is very excited to be jumping into the big red suit and spending this holiday season with Buddy the Elf, and all of you at Pioneer Theatre Company! You might have seen Jason on PBS as Sheriff Vallon in the Live from Lincoln Center NY Philharmonic’s concert of Show Boat, Dick Dead-Eye in HMS Pinafore, Cleopas in Easter Mysteries, and the Maitre’d in Susan Stroman’s production of The Merry Widow at the Metropolitan Opera. Other TV/Film: “Bull”, “An Angry Boy” “Little Voice,” “Spongebob Squarepants: Sponge Out of Water,” “White Collar,” “Exploitation,” and “I’d Kill For You.” Multitude of voices for commercials, movies, and video games. National Tours: Sister Act, Wizard of Oz, The Producers, CATS!, The Scarlet Pimpernel, and Funny Girl. Founding member of Festival 56. Love and thanks to my beautiful wife, Tara! jasonEsimon.com. 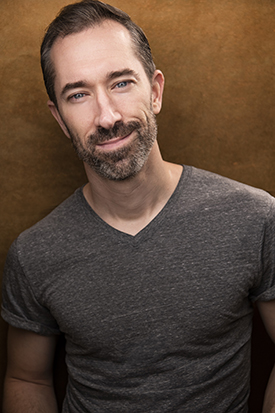 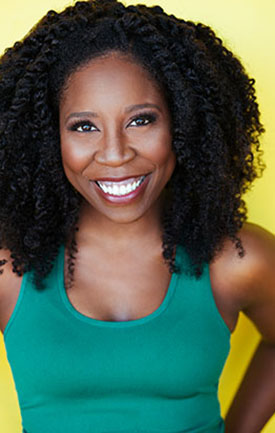 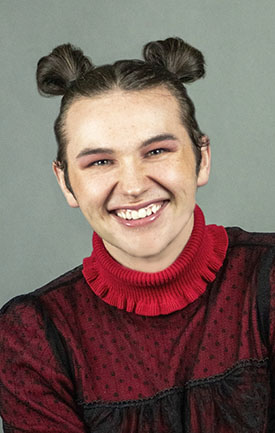 T ANTHONY (Ensemble) is grateful to be making their professional debut with PTC! Recent artistic endeavors include When Shakespeare’s Ladies Meet (Open Door), Floyd Collins, The Odyssey (University of Utah), and The College Tour with Amazon Prime. They are a Senior in the University of Utah’s BFA musical theatre program, and a freshly certified Yoga Instructor. Peace, Love, and Stars. 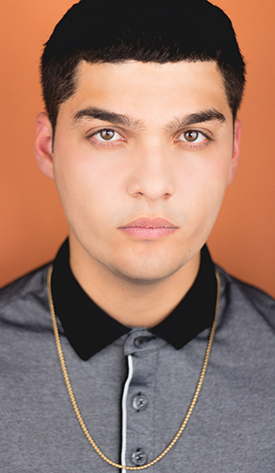 DANNY BORBA (Ensemble) is excited to have his debut at PTC. Past credits include Henry V/King of France in Henry V and the musical Songs for a New World (University of Utah). He has also recently been working on the TV show “High School Musical: The Musical: The Series.” He is represented by Talent Management Group in Utah. He thanks his family and friends for their ongoing support.

ASHLEN BORESOW (Elf) Originally from Shawnee, Kansas, Ashlen is a sophomore in the musical theatre program at the University of Utah. Some of her most recent credits include playing Mrs. Dickinson in the World Premiere of The Emily Dickinson Musical (Studio 115) and Naked Mole Rat Gets Dressed: The Rock Experience (Babcock). Ashlen is so grateful to be performing again + she hopes you enjoy the show! 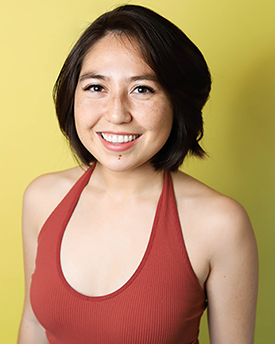 KIMI HANDA BROWN (Ensemble) After graduating from the University of Utah in 2020 with their BFA in Musical Theatre, they spent 2020 performing online, playwriting, and intimacy directing. The year 2021 began with their play Daddy Issues kicking off SLAC’s New Play Sounding Series, they performed their play Manic Pixie Nightmare at the Great Salt Lake Fringe Festival and with Standby for Places, produced their play Shakespearean Support Group as a radio play (available on all streaming platforms). Brown’s preferred pronouns are They/Them. Please enjoy the show! 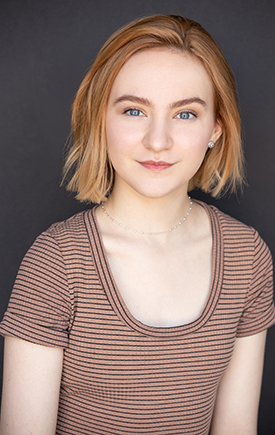 KATIE CALDERONE (Elf/Ensemble) is a junior at the University of Utah studying musical theatre, and she’s thrilled to be making her PTC debut. Her credits at the U include The Night Witches and Songs for a New World, and she will be appearing as Viola in Illyria in the spring. Thanks to the creative team for this opportunity. 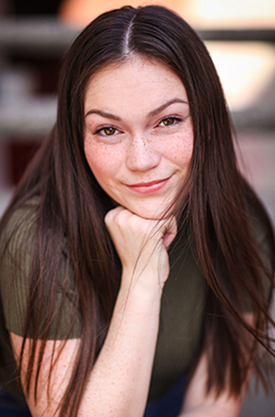 JORDAN CRUZ (Elf) is thrilled to be in her first show at PTC! She is a freshman in the musical theatre program at the University of Utah. Originally from Southern California, she attended the Orange County School of the Arts for Musical Theatre and played roles such as Eva Peron in Evita. Jordan would like to thank her family and friends for their unconditional support. 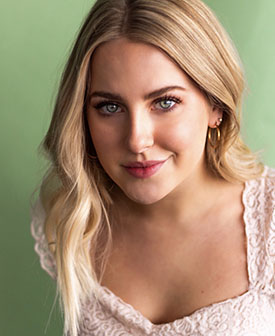 ABBY HOPE DAVIS (Elf) is a senior in the musical theatre program at the University of Utah. She is thrilled to make her PTC debut in curly-toed shoes. Her most recent credit includes Dear Evan Hansen’s “Zoe” in Utah’s Thrive 125 Celebration of the Arts, live on KSL. You can see her in Illyria at the University of Utah this spring. She would like to thank her Grandma Val for supporting her in every show! 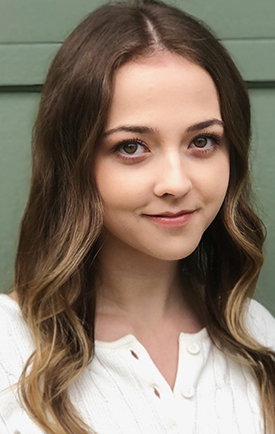 KELSIE ENGEN (Elf) is beyond grateful to be a part of this amazing production! She is currently a senior in the musical theatre program at the University of Utah. Past credits include A Christmas Story at the 5th Avenue Theatre, Chitty Chitty Bang Bang at Seattle Children’s Theatre, and Into the Woods at Second Story Repertory. She thanks her parents for their endless support! 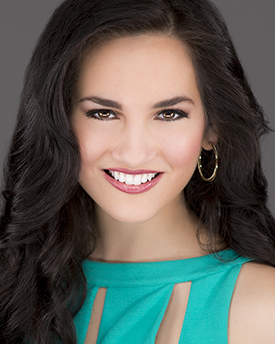 ELIZABETH FALK (Ensemble) After attending Oklahoma City University, Elizabeth danced overseas on Princess Cruises for several years before working in Branson, MO! There, she performed in numerous shows such as Reuben’s Swashbuckling Adventure and It’s a Wonderful Life. Elizabeth is now a proud resident of Utah and is excited to be in her first show at PTC! 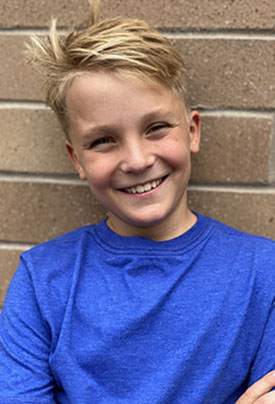 AUSTIN FLAMM (Michael/Charlie) is thrilled to make his PTC debut in Elf The Musical!  Austin loves performing and has been Tiny Tim in A Christmas Carol at Hale Centre Theatre, Olaf in Frozen Jr, and Michael in Mary Poppins Jr at Midvale Main Street Theater. Austin has also been in multiple commercials including Starslide. Outside of acting he loves to ski, play soccer and guitar. He’s the best and his family is very proud of him. 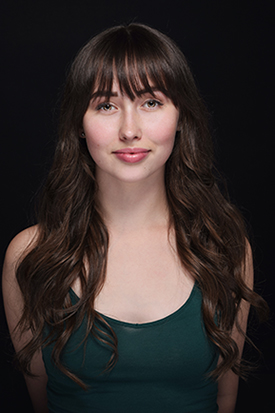 SERENA KOZUSKO (Ensemble) is thrilled to be back at PTC! She was previously seen in PTC’s production of Grease in 2019. Recent credits include Cha-Cha in Grease at Music Theatre Wichita and Fran in Strictly Ballroom at Hale Centre Theatre. Serena also studied musical theatre and linguistics at the University of Utah. Thank you to her incredible family and friends for their support! 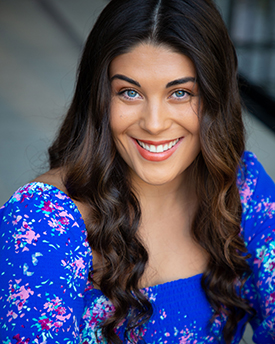 MICKI MARTINEZ (Ensemble) is thrilled to be back at PTC after appearing in the concert productions of Dirty Rotten Scoundrels, La Cage aux Folles, and as Nina Rosario in In The Heights. Martinez holds a BFA in Musical Theatre from the University of Utah and participated in several department productions, the PTC Student Internship, and SLAC’s University Professional Theatre Program before graduating in 2020. She is delighted to be spending the holidays here with all of you! 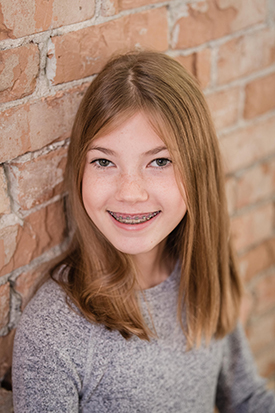 ANNIE MAUTZ (Elf/Kid) is thrilled to be making her Pioneer Theatre Company debut in Elf. Annie attends 7th grade at The Salt Lake Arts Academy and has previously performed with The University of Utah Youth Theatre in the productions of Alice and Schoolhouse Rock Live! Jr.  When not performing, Annie enjoys singing, dancing, baking, and skiing. She loves animals and spending time with friends and family. 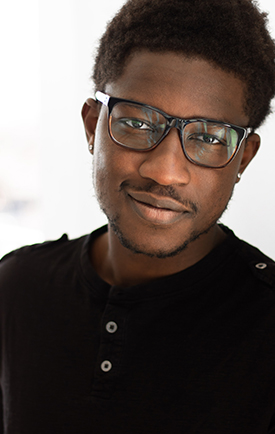 JONATHAN ONYANGO (Ensemble) is extremely grateful for this opportunity to make his PTC debut. He’d like to give a shout out to his family, friends, and voice teacher for their constant support. 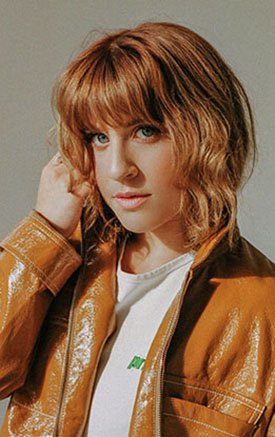 ARIA SAGE (Elf/Ensemble) is thrilled to make her PTC debut in Elf The Musical! She graduated from the U’s musical theatre program in May. Her highlights of performing in the program and Salt Lake area include Sia in Big Love, Hermia in Midsummer.., Farrah, Narrator, and Evil Tina in She Kills Monsters, shows at Lagoon and commercials and dance videos. She is now releasing music you can listen to on all streaming platforms. Follow @aria_sage_ to catch her latest tunes, fire dancing videos and yoga classes! Keep spreading your light! 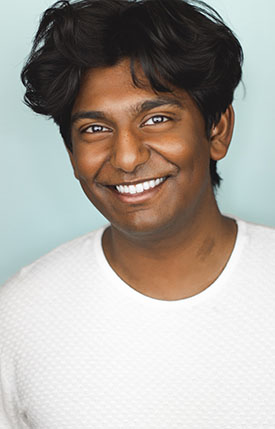 AATHAVEN THARMARAJAH (Ensemble) is thrilled to be making his PTC debut in Elf The Musical! Previous credits include Kavin in #SLACabaret (Salt Lake Acting Company), Ren in Footloose (Ziegfeld Theater), Joe in Cocaine Triptych (Open Door Productions), and Laertes/Antony in When Shakespeare’s Ladies Meet (Open Door Productions). Ensemble credits include the U.S. premiere of Strictly Ballroom the Musical and Freaky Friday (Hale Centre Theatre). Aathaven is currently a senior in the musical theatre program at the University of Utah. 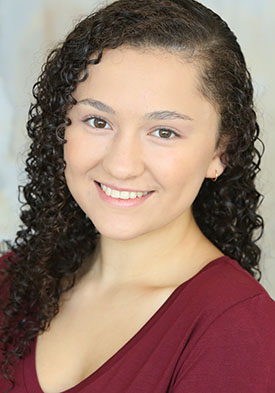 ANNA UHL (Elf/Ensemble) is a sophomore in the musical theatre program at the U and is so excited to be performing in her first PTC show! Anna is from the lower Hudson Valley of New York, and has trained in theatre and ballet for the past 10 years. A few of her favorite roles include Clara/The Sugarplum Fairy in The Nutcracker, Peggy Sawyer in 42nd Street, and Jenny Hill/dance captain in Big Fish. 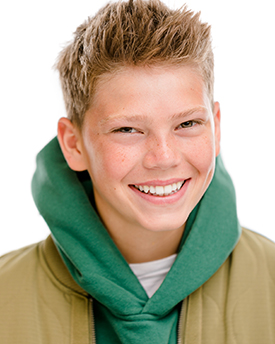